Welcome to the first installment of Looting The Trove, a look at the behind-the-scenes development of the games in the CTG library. For our first outing, I decided to share a behind-the-scenes piece of Cloudspire, the Chip Theory title that’s nearest and dearest to my heart.

When Cloudspire was first in development, our intrepid designers Josh, Adam and Ghillie started with some gameplay ideas and a generalized view of the world of the game – a land of floating isles that have now been forced together. However, a lot of the specifics weren’t nailed down. We knew we wanted to include the grovetenders and a race of giants (which you now know as the brawnen), but we weren’t tied down to many other details. During the development process, we created a world bible for the game (then tentatively titled “Cloudspire: Turrets of Ankar”), which then received several tweaks over the coming months.

Some of those tweaks may seem small, but they had the potential to make a major impact on the feel of the game. A perfect example is the name of the brawnen.

When we were first working on the game, we all called the giants “the giants.” After all, that’s what they were. However, the design team wanted a unique name to make the race stand out amongst the other, non-standard-fantasy races like the heirs, narora and grovetenders. We just couldn’t figure out what the name should be.

Cut to Sept. 13, 2018, a day before CTG announces the Cloudspire Kickstarter on its website and about a month before the Kickstarter goes live. At this point, the brawnen still don’t have an official name, but the top candidates are “monstero,” “enorm” and “enormen,” with monstero in the pole position. None of us were fully sold – why would a race of people refer to themselves as monsters? – but we needed to pick a name before the announcement. I told told the designers I would brainstorm a bunch of giant-sounding names and sent them a big list. 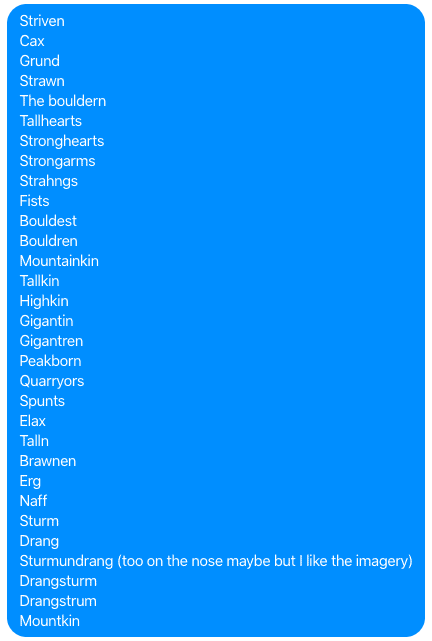 At the time, I was partial to a few of those, particularly bouldren (although that, along with a couple of others on the list, also turned out to be a preexisting brand name!), but I’m glad the designers chose “brawnen.” These days, I can’t imagine Kram and company any other way. The list also had another use: If you look closely, you can see a few names that get shout-outs in cards or in the pages of Cloudspire Vol. 1: The Joining War. And, of course, there’s Drang, who turned into a hero character all her own.

To finish out this month’s Looting The Trove, we’re sharing a section of the very first draft of the world bible’s entry on the brawnen. Thanks for reading!

The giants are not the most intelligent race on Ankar, but what they lack in tactical prowess and intellectual superiority, they make up for in ambition. There are few values they will not set aside or sacrifice on the altar of progress.

Most giants are taller than any other Ankarian race, usually measuring around seven feet when they reach adulthood. However, a small percentage of the giant population carries a recessive gene that, when expressed, causes them to never stop growing as they age. As a result, a small number of giants grow to 30 feet high or more by the time they reach middle age.

Giant society has not generally advanced to the point where the rest of the giant population has allowed many accommodations for “the tallest ones,” as they are known colloquially. This is due in part to the fact that giants with this gene also slowly lose their intelligence as they age past the “regular” giant height. Giant culture regards physical labor as the primary usefulness of the tallest ones as they grow into their strength and out of their intelligence, so the life of the tallest ones usually becomes simpler and more menial as they age.

For the rest of the giants, this arrangement has allowed them to live a more comfortable life, even as other nation-states look down on their practices as cruel and backward. The giants have always excelled at building simple machines, and using tallest one labor has allowed them to implement those designs on a larger scale, as their strongest countrymen do all the heavy lifting to put their designs into place. The war has presented another use for the tallest of the tallest ones: combat. While all of the giant military leaders and most of their common foot soldiers are average sized, the giant army also has access to a select number of tallest ones that it deploys like disposable berzerkers. Those giants crash onto the battlefield alone with giant clubs or other simple weapons, wreaking as much large-scale destruction on their enemies and defenses as possible before they’re laid low (and if a perishing tallest one falls in such a way to crush a few more enemies on the way down, all the better).

As giants’ machine building and luxury has advanced, their leaders have seen that their island’s Source supply is dwindling as the population’s great engines require more and more energy to keep society operating at its current level. After colonization attempts appeared to not generate enough Source on their own and diplomatic relations with the giants’ neighbors proved unsuccessful — in addition to fears that the giants’ rampant Source use would affect their own supplies, most of Ankar’s nation-states disdain the giants’ treatment of the tallest ones — giant leadership began to foment mostly made-up diplomatic and cultural slights of giant culture by some of its neighbors. Rank and file giants were also told that the other nation-states wanted to curtail the giants’ way of life and were made to suspect that their neighbors were making secret alliances against them. When the giant high command caught an heir scout flying above giant airspace — admittedly a violation of previous agreements between the two races — they had enough pretext and societal support to declare war. 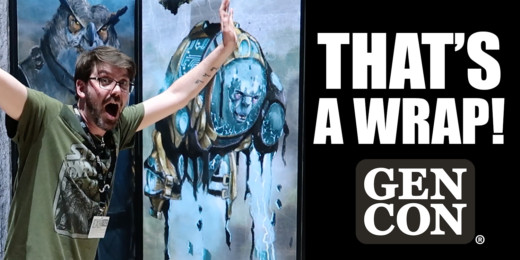 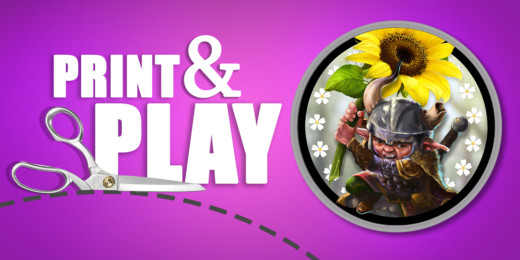