Welcome to Fiction Friday, a feature on our blog where we contribute a new piece of lore to the universe of one of our games. We hope you enjoy it!

Grorglesnax rushed into the entry chamber of Marrow’s stone ruler’s barracks. The attending orc was a good foot higher than him, and Grorglesnax hated him.

“Are ya done muckin’ the manticore stables yet?” the attendant growled, sneering down at him.

Grorglesnax allowed himself the briefest of sighs, hoping his superior didn’t notice. Seemingly counter to their airborne grace, manticore dung was exceptionally dense and took quite the effort to clean.

“No, sir!” he replied, doing his best to keep his face stony. The attendant scowled, bending down to leer in Grorglesnax’s face.

“Lazin’ around on the job, are ya?!?” the orc screamed, hurling flecks of spit into Grorglesnax’s face. “Or are ya just too puny?!?”

He shoved Grorglesnax to the ground. The smaller orc pushed himself up but said nothing, waiting for the next verbal assault. I won’t be drawn into this.

“Hurry it up!” the attendant yelled. “We got a new job for ya, one that’ll take ya outta my sight for a few wonderful days!”

Grorglesnax’s interest was piqued. This was the first time in ages he’d been tasked with leaving the war grounds, and, if the mission really was going to take a few days, this job would probably take him out of Warspire entirely. “Ready for orders, sir!”

The attendant (Grorglesnax thought his name was Killbert, but he couldn’t be certain), seemingly satisfied with his bullying for now, handed Grorglesnax an uncrumpled piece of parchment. “We need someone to pick up a parcel at the Artificer Collective, and it looks like you’re ‘someone,’” he said. “Finish the muckin’, and head out right after.”

Killbert (or whatever his name actually was) turned to head back to his post outside the inner chamber door. Grorglesnax cocked his head.

The attendant whirled back around. “If anybody around here wanted ya to know what the parcel was, we’d have told ya!” he shouted. “You’re a peon! You do what you’re told! Ya hand the paper to a goblin at the Collective, and they’ll give ya what’s needed! Now get out of my sight!”

Grorglesnax whirled on one foot and headed for the exit. As he was leaving, the attendant hurled one last direction at him. “And go on foot! We need the manticores for a raid!”

Grorglesnax trudged through a humid patch of jungle, swatting away mosquitoes as he tried to make sense of his hastily scrawled map. Currently, he was wishing he hadn’t been quite so hasty, as well as angry at the choices that had led to him being in this position – both his choices and others’.

“Career mobility” wasn’t really a thing in orc society. Basically, you fight, or you make food for the fighters, or, if you’re lucky, you tell the fighters where to go and what to do. Grorglesnax had no taste for fighting and even less skill at cooking, so he decided young in life that a command position was the place for him. Then, he could stay behind – or at least stand far behind – while the fighting happened, and perhaps under his leadership he could even lead the orcs to a better society where people were judged by more than their skill with an axe – a merit-orc-racy, if you will.

However, Grorglesnax was the son of an undistinguished orc scavenger named Bindlebunch, a nobody in the Warspire orcs, so he decided the only way to get where he wanted to go was to work his way up from the bottom – the very bottom, as an orc peon. He thought if he kept his head down and worked hard, he’d be recognized and respected by his fellow orcs – but instead, three years into his servitude, he remained a peon and was currently 12 days into a lonely journey through Daelore’s dangerous southern jungles, complete with several near misses escaping from primate trapsmiths.

He folded up the map and shoved it into his pack. Sighing, he continued to trudge through the trees, slopping through a light muck and serenaded by the gentle buzz of a million bugs.

He continued on that way, in the glum silence of resignation, for the better part of an hour. Then – and later, he could not remember when the change had begun – he noticed the buzzing had started to get louder.

Before he could even react to the thought, a barrage of whirring metal objects burst out of some brush to his left. Quickly he dropped, scrambling under some vines, hoping to buy time to discover the nature of his adversary.

Grorglesnax’s eyes darted this way and that, searching for his unknown assailant. Shortly, he was taken aback when a swarm of what appeared to be small robotic wasps hovered into his field of vision. The bot swarm pivoted and moved as one, peering high and low for its prey. After a minute or two, Grorglesnax heard a small crackle. Then, a voice began emanating out of the swarm, eerily echoing 100 times or more as it blared from each wasp’s tiny thorax speaker.

“Good day, subject!” the voice said, using a broken orcish dialect that gave away the speaker’s lack of fluency. “You have upon come the territory of greatest Daelore scientist. As so, you have agreed to donate yourself for helpful experiment!”

Grorglesnax’s eyes widened. He felt around the ground for a stick, rock, or any other sort of improvised weapon. He’d dropped his camping axe in a creek a few days prior.

“Painless procedure. Mandatory to comply, it is,” the voice continued, as the wasps bopped around the jungle clearing. “Thank you for cooperating!”

Don’t panic, Grorglesnax told himself. Don’t panic. His hands found a fallen tree branch, and he gripped tight in anticipation. When it looked like most of the eyes on the bot swarm were facing away from him, he scrambled to his feet and ran out of the brush as fast as possible. He got one good whack on the swarm and then ran headlong through the jungle, not bothering to check if he was going the right direction. He looked back only once and saw several of the wasps sparking on the ground as other wasps closed in on them, for what purpose he was unsure. Then, however, the stinging began, painful jabs and stabs on his arms, legs and cheeks – segments of the swarm that had broken off to follow him, each one shouting an echoing command in his ears. Still he ran, not trying to evade or defend, just to run until he no longer could.

Eventually, the remaining wasps peeled off to rejoin the swarm, and Grorglesnax hid in the base of a tree by a small Sibron tributary to nurse his wounds and try to make sense of where he might have traveled. He was surprised when, in a fit of frustration, he punched the tree trunk and knocked off a large chunk of bark. 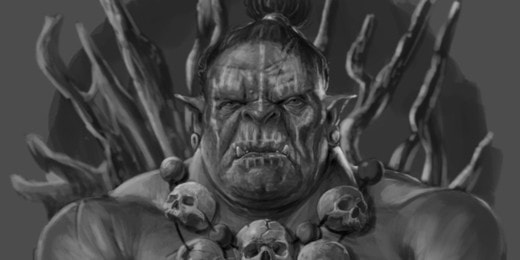