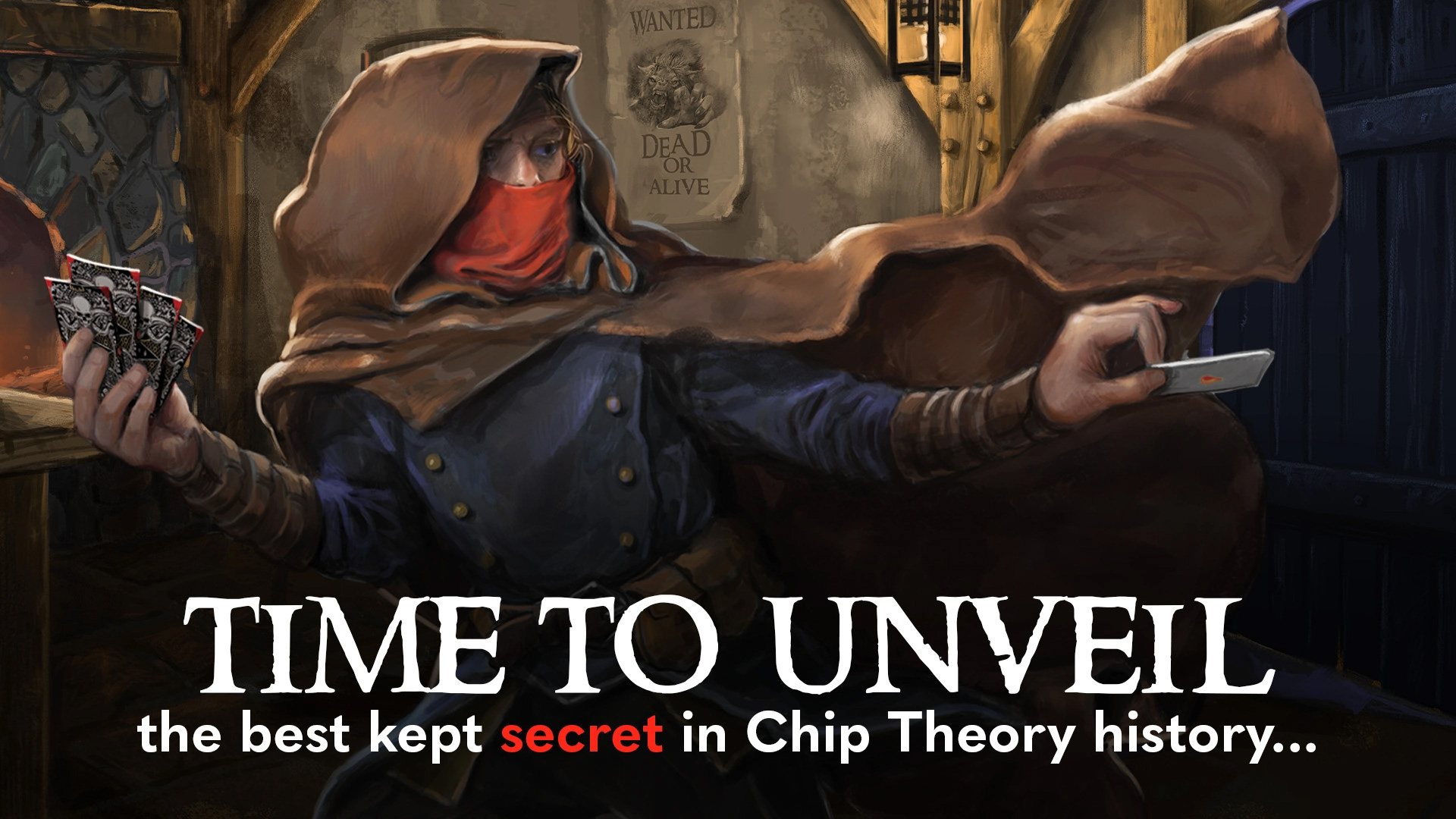 So, if you’re a Chip Theory or Too Many Bones fan, you may have noticed an interesting new addition to our online store today: Riffle, a previously unannounced Gearloc, has made their temporary debut there. We’ve actually been working on this deck-based Gearloc for quite a long time, and, as is only fitting for Chip Theory, our method of releasing Riffle has grown and changed and become more elaborate over that time period. Because Riffle has been so long in the making, we thought it would only be fitting to give you a peek behind the scenes of how exactly they were made, and how they finally came out of hiding.

The story of Riffle, our final planned Gearloc, has always been twofold: the character itself and how the character would be unveiled. The whole idea got its start in 2019, in the wake of the Splice & Dice Kickstarter campaign. You see, there’s this… longstanding and unconfirmed-by-us rumor (wink wink) that we hide riddles in the contents of our big box TMB titles, and we had begun working with the folks at the Minnesota puzzle game company Enigma Emporium on a potential partnership to put a riddle in Splice & Dice. Is there actually a riddle in Splice & Dice? We can neither confirm or deny this, but if there is, we’re certain the Enigma folks did an excellent job.

Enigma Emporium is run by Khiara Foss and Logan Giannini, and our partnership with them was the start of a very fruitful relationship. Though Logan still co-manages Enigma Emporium, you may recognize him as a now-full-fledged Chip Theory employee who is one of the development minds behind our Hoplomachus Victorum and Remastered boxes, as well as a number of in-development projects. What you may not know is that at the time when we were working with Logan and Khiara on Splice & Dice, they had recently finished a very exciting project for their own company: Carte Rouge, a challenging, gorgeous, 54-card puzzle deck that leads players on a mysterious journey over the course of several hours.

We loved Carte Rouge, and since things were going well with our Enigma partnership, we thought it would be a cool idea to work with them on the creation of a Too Many Bones-themed puzzle deck. Then, of course, we decided to one-up ourselves on the complexity of its release: What if we used the deck to secretly unveil a new Gearloc? Over the years in the depths of BGG threads, many had speculated that at some point we may have a secret Gearloc in some capacity. It would be audacious and ridiculous and fully in character for CTG. The thing is, Gearlocs need a lot of development time, and it’d be crazy to release one in any kind of obscured or limited capacity… right?

With this in mind, and combined with Josh and Adam’s love of poker, Riffle was born. Unlike other Gearlocs, Riffle comes with only 10 skill dice instead of 16. Their other six dice slots are devoted to their deck of 52 cards, with four unique suits (gears, bones, essence and vision) in place of the traditional hearts, spades, clubs and diamonds. Riffle still has abilities that can be activated via skill die or backup plan, but to really make the most of the character, players must cleverly utilize the card deck, drawing and playing various card combinations that manipulate the battle in their favor. They’re a very fun, totally unique character, and the deck of cards tied in perfectly to the puzzle deck concept we were working toward. Since Riffle would be the result of solving a riddle, we also decided to make them an enigmatic figure who was obsessed with puzzles and tinkered decks and would only reveal their identity (partially, as they’ll remain masked forever) once a clever soul uncovered it.

But how to release the puzzle deck, which in turn would release Riffle? This element has undergone a lot of changes since 2019. At first, we wanted to release the puzzle deck gradually, maybe dropping one or two suits a year in the form of single-card giveaways with online store orders or at conventions. The goal of this release strategy was to engage the community, encourage group riddle solving, and drive buzz and anticipation for whatever would be coming once the riddle was complete. However, many of you might remember 2019 as the last year things were normal before the world was changed by the coronavirus, an event that kind of torpedoed our gradual release plans for a variety of logistical reasons.

That said, we were still in love with the puzzle deck idea, so we kept working on it with Enigma, with Khiara as the design lead. The question became how to release it.

The answer was silly and overproduced (aka a perfect Chip Theory idea): Why don’t we hide it in the back of a pop-up book? Josh and Adam had become enamored with the pop-up idea, and we had already decided to do a project that would end up becoming The Automaton of Shale, but we were looking for that extra bit of pizzazz that would really make the whole product feel special and over-the-top for our customers. The decision was made to place the entire deck in the Automaton of Shale’s packaging but not announce its existence until well after the product’s release, wowing fans when they opened the box and discovered a whole new experience to take on beyond the playable TMB adventure that comes with the book. We should note that before we decided to add the puzzle deck to Automaton, the MSRP had already been decided, and because we had originally planned to distribute the puzzle cards for free, we added the complete puzzle deck to Automaton for “free” as well. It was important to us to keep the cost of the riddle deck out of the price of Shale because we know not all of our audience love these puzzles.

The Automaton of Shale was finally released this summer, and people started solving the riddle, which brings us to today: Riffle has come out of hiding, but only for a limited time!

Here’s how it works: There is a counter on our website that you can see and add to if you solve the puzzle deck riddle. Once that counter reaches an increment of 500, Riffle temporarily comes out of hiding and is available on our store for 24 hours (since this is their grand debut, they’ve decided to stick around for 48 hours this time only). After that time period, they will go into hiding again until another increment of 500 is reached.

To be clear, we expect Riffle will be available two or three times a year, based on current puzzle solving rate. If the puzzle solving rate slows down, we reserve the right to also reduce the number of solves required to make sure Riffle’s appearance is a regular, ongoing event.

We want to make this Gearloc (and the book and deck that spawned it) feel like a special, ongoing, participatory event for our fans, and placing Riffle’s release in their hands felt like the best way to do that. And if you, like us, can’t get enough of Riffle, they’re also a featured character in the upcoming Cog Book, tying them in with the other new lore and characters from the Too Many Bones: Unbreakable cycle.

So that’s the story of Riffle – who they are and how they came to be. This never would have happened without a massive, years-long undertaking involving a huge number of people, from the folks at Enigma Emporium to everyone who worked on the pop-up book to our excellent support and logistics teams to our dedicated website designers and coders to our devoted playtester community, and more. But, most of all, it happened because of and for you. You continue to astonish us with your support for our company and its crazy ideas, so we hope you enjoy a Gearloc that is fitting of the Chip Theory Games ethos: complicated in production, ambitious in scope, made with love and a passion to do things differently.

Riffle is a preorder, so when will they ship?

For (most of, anyway) the folks who have fully solved the Automaton puzzle deck, we are air shipping in a limited quantity of Riffles that will go out in the very near future (likely in a few weeks, though as we learned with recent Hoplomachus stuff, even air shipping is difficult to time in this day and age). We opened orders up for puzzle solvers a few days ago in secret, allowing them to place their orders on the front end of the release.

For the general non-puzzle solving public, we expect Riffle will ship out in November/December. Production on the character is nearly done, and they will be loaded into containers and headed toward our fulfillment hubs in very short order.

Can I add Riffle to my TMB: Unbreakable or burncycle: New Recruits pledge?

No. And we know this may… ruffle… a few feathers. Again, we can’t stress enough that Riffle and their subsequent release was a years-long undertaking that we expected would be completed long before we had actually even conceptualized Unbreakable.

Adding Riffle manually to hundreds (if not thousands) of orders is also simply not something we’re able to handle from a logistical perspective. Also, adding it to current PMs, like burncycle, removes the special way we intended to release this character (we know, our sales loss).

So, whew! There you have it, folks. Riffle! We’ve been playing the long game with this reveal for literally three years strong. This character was playtested in secret. We’ve laid lots of clues and insinuations along the way, but now, they’re finally here. We hope this serves as a fun and dramatic surprise that brings renewed energy to your TMB adventures while you await the massive new bevy of content from the Unbreakable campaign.

Thanks so much for reading this long-winded post. We’ll talk to you soon!

One thought on “Introducing Riffle! (for a limited time only)”